This is the first mill we visit, just a few meters from the Ecomuseum, and crossing the medieval bridge of La Vall d’Ora. It is a two-building joint. The first building has a ground floor where there is the milling room, open to visitors, and on the first floor, there is the home. The second building, the sawmill, is a separate construction next to the river.

A LITTLE BIT OF HISTORY

The use of hydraulic energy to move the mills, sawmills and smitheries of the valley is dated on documents back to the 12th century, where they talk about the mills moved by Aiguadora river.

By the end of the 20th century, specifically in the 80s, the two last mills that were still in operation in the valley stopped working, the one from ca l’Ambròs and the other from cal Guirre.

In 1995, from an initiative of the Navès Town Council, they carried out the restoration of the mill of Ca l’Ambròs and in a much wider project from which they created the Ecomuseum of La Vall d’Ora. All together is a great proof of industrial archeology which has been recovered to leave some record for the coming generations.

The flour mill, with two millstones, also preserves in quite good condition some of the machines they would use for the flour process: the grain cleaning machine, which was used to clean the wheat before the grinding, and the flour wheel, which, through some sieves, divided the flour according to its thickness. Referring to the mills, you can see the cavity of the water mill wheel through a grille from the outside of the house. It worked thanks to the hydraulic power of the water accumulated in a pond situated in a field right next to Ca l’Ambròs. This pond was fed by the same dyke which led water to cal Guirre, just a little further.

The sawmill, of circular saw, is activated through a wood roller, situated below the building, which, once it turns, transforms the hydraulic power into mechanical through a system of shafts and pulleys (drive shaft). Other mechanisms such as the millstone also used the drive shaft to work. 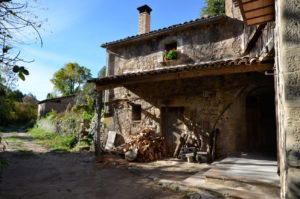 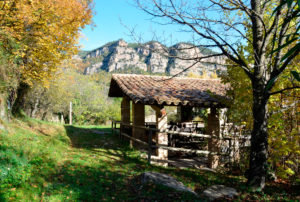 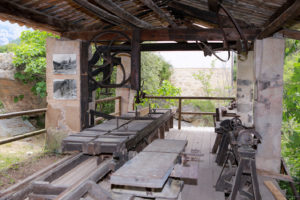 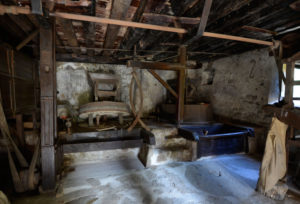 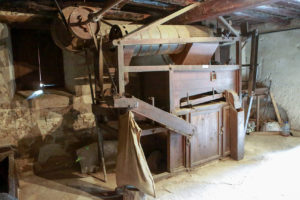 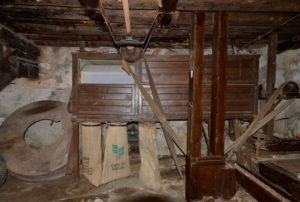